A recent tweet from the official Clash of Clans Twitter handle revealed the biggest October 2022 update reveal. Fans were previously informed of the update regarding the Barrack changes, among other things. This CoC October 2022 update, however, confirms a new Town Hall 15 update.

The tweet stated that the current Town Hall 14 challenge is the last one for Clash of Clans players, implying a new upcoming update with Town Hall 15 and good news for fans.

Barrack changes are coming in Clash of Clans October 2022 update

The official Clash of Clans website recently received detailed information about the Barracks changes. It was stated that there will be no additional Barracks or Dark Barracks on the base following the update. The highest level Barrack will only be kept in the base of the players. Even while under construction, the production Barracks will continue to produce spells and troops.

The only difference is that these Barracks will produce at a 50% faster rate than normal. If the player trains its troops from one Barrack and one Dark Barrack, the time required to train troops in four Barracks and two Dark Barracks remains the same.

So the rumors are correct. Supercell, as usual, announces the Clash of Clans Town Hall 15 update alongside the Hammar Jam event. "While Town Hall 15 does not have a unique signature defensive weapon, its Giga Inferno can be upgraded several times to make it even more powerful than before," Supercell said in the Tweet thread.

Town Hall 15 was also announced earlier this month in an official video titled "Clash through the Years" released by Clash of Clans officials. And now it has been confirmed.

The October 2022 update to Clash of Clans introduces two brand-new and distinct Defense buildings, the Spell Tower and the Monolith. The Spell Tower is pre-loaded with the Laboratory's familiar Spells. You can select which spell your Spell Tower will use to defend your Town Hall as it gains spell power. At level 1, a Spell Tower will cast a Rage Spell to bolster nearby defenses and units. At Level 2, you can program the Spell Tower to cast Poison Spell against nearby attackers, and at Level 3, it will cast Invisibility, temporarily concealing nearby defensive units and buildings. As you approach Town Hall 15, you can build a maximum of two Spell Towers on your Home Village.

The Monolith is a tank-killing tower that is built and upgraded with the enigmatic Dark Elixir. Even its ominous presence casts a shadow on the environment. Although its origins are unknown, there is no denying its effectiveness in wreaking havoc on opposing forces.

Because each shot it fires deals additional bonus damage based on a percentage of its target's maximum health points, Monolith is extremely lethal against high HP units such as tanks or heroes. This is in addition to the base damage dealt by Monolith with each shot.

Initially introduced with Town Hall 14, Pets are now inseparable companions for the Heroes moving forward. With the October 2022 update, Town Hall 15 brings four new Pets namely: Poison Lizard, Phoenix, Frosty, and Diggy. Let’s take a look at each of them and their specialties:

Poison Lizard: The Lizard when partnered with the Hero arrives the quickest on the battlefield. It causes massive damage to the enemies by spitting slow venom toxins on them.

Phoenix: As her name suggests, she is the master of resurrection. Acting like a Healer in the most precious times, the Phoenix gives temporary invulnerability to its companion Hero.

Frosty: Frosty uses his cool and ice breath and freezes the enemies similar to the Ice Wizard. Additionally Frosty releases a swarm of Frostmites similar to Yetimites from the Yeti to slow enemies.

Diggy: Diggy acts like the Miner and likes to spend time underground. While approaching a building the Diggy will come out and attack nearby buildings.

Recall and Reuse your troops with the new Recall Spell

With the Clash of Clans October 2022 update, Supercell also introduces a brand new spell, the Recall Spell. The Recall Spell allows you to remove your troops from the battlefield and reuse or redeploy them elsewhere. This could be a game-changing tactic for future Clan War attacks.

According to Supercell's announcement, players can save their troops from lethal enemy defenses by using the Recall Spell. The troops can then be repurposed to attack the base from a different angle. The Recall Spell is available from Town Hall 13 onwards.

Battle Drill, a brand-new Siege Machine, is also included in Town Hall 15. The Battle Drill functions similarly to a Stone Slammer, but from the ground. It attacks any type of ground defense and appears next to it from underground. The Battle Drill can also benefit from the massive Stun effect, and because it is underground, even the Scattershot cannot target it.

The Battle Drill, like the Miner, will burrow beneath the ground to avoid detection by enemy defenses. When Battle Drill appears to attack an enemy defense, it will temporarily stun its target! Furthermore, attacking it resets an Inferno Tower and most defenses, making it a worthy companion for any Hero dive. The Drill will disintegrate upon destruction, and Clan Castle troops will emerge from it.

With the addition of a new troop, no Town Hall update is ever complete. With Town Hall 15, Supercell introduces its newest troop, Electro Titan, to the Main Village. According to leaks, the Electro Titan is a ground troop with the ability to target both ground and air targets and requires a massive 32 Housing Space. 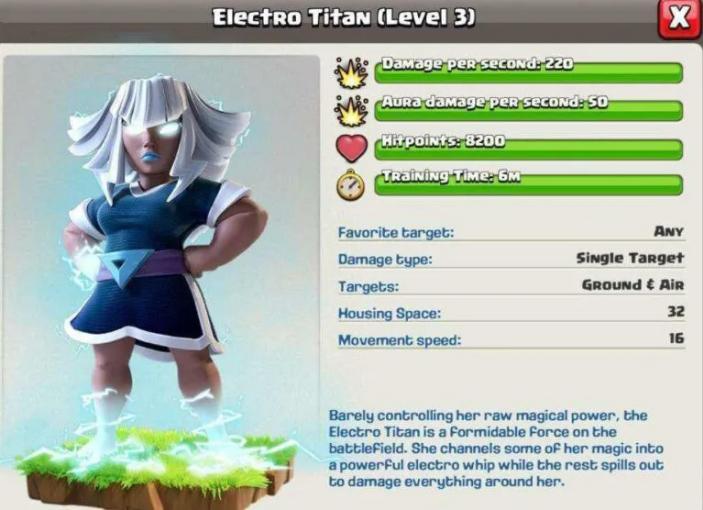 Due to her excessive housing space, only 10 Electro Titans can be filled in the maximum Army space, with an additional (11th) in the Clan Castle. As a ground trooper, she is compared to her female electro counterpart, the PEKKA. It remains to be seen whether an entire army camp of Electro Titans can be as productive as the PEKKAs.

According to the troop description for the Electro Titan, she is a formidable force on the battlefield. Some of her magic can be channeled into a powerful electro-whip, while the rest of her magic spills out to harm everything around her.